The placement of the date is in the normal position.  However, there is a doubling of three of the four numerals, 18-1, in the date.  The first 1 has a doubled vertical bar on the right side.

The upper and lower loops of the first 8 are doubled on the left inside and on the surface on the right outside.

The right 1 has a broken doubling running diagonally across the bottom left side of the vertical shaft to the center of the base, this is due to multiple digit punching.

Think of it as someone started with a normal working die, and then when they punched in the date that had problems.  The multiple strikes of the date punches left impressions of the previous strikes.  Then continuing on when they got to the reverse they were not careful and added the mint mark just a little to the left of where it is intended.

Obverse Die 2 is another that is associated with a single VAM, VAM 3.  Like so many 1881-O coins the key to the identification is date doubling in unique ways.  This is a readily available VAM, so we have multiple coins to study.  As of this writing there are 6 Mint State coins in the collection and they do exhibit at least two states.

The earliest state, as you might imagine, is one where there are no die cracks.  But even in this state the coin shows a little fatigue at the top of the die. 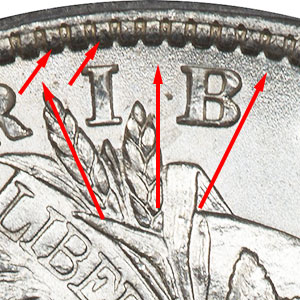 But this coin we have illustrated here is one that is a favorite because of a different issue.  This one, an MS63, shows what is believed to be die ejection marks in the denticles.  This is often mistaken for denticle doubling, but so far classified as ejection markings.

There are times that toning obscures coin features, and times when they accentuate them.  This is one time where toning helps us see a feature. 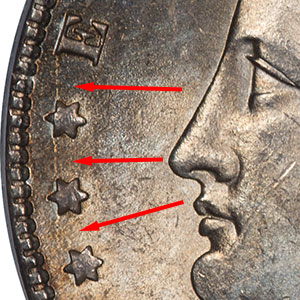 On this Mint State 64 coin the die crack shows up more clearly because it does not tone as easily.  In this example the die crack extends down from the E through the closest 2 stars and stops just short of the third.  The crack does not go through the stars. 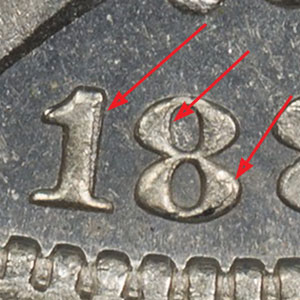 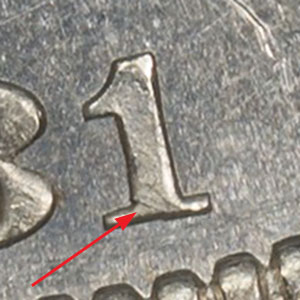