Die 7 appears paired with only reverse die a.  It is distinguished by a slight doubling of the second 1 at the top left of the upper crossbar, and a notch on the lower right side of the vertical shaft.  There is a spike in upper loop of first 8 at about 11 o'clock.

The VAMs are distinguished by reverse die characteristics.

Obverse Die 7 appears with two VAMs, 15 and 41.  Both VAMs are labeled as Doubled 1, but in both cases it is the last 1 and not the first.  Both feature the Spike in 8.  The variation in the two VAMs is the reverse where VAM 15 is paired with a Normal Die a and VAM 41 is paired with Die p.  Reverse Die p has doubled and tripled features.

Obverse Die 7 is one where we have a large number of examples.  As of this writing we have sixteen examples with VAM 15 and seven examples with VAM 41.  In no case do any of the coins exhibit any die cracks or breaks, so these are all early die state examples.  But, we do believe the die was used on VAM 15 first and then later paired with Reverse Die p after re-polishing. 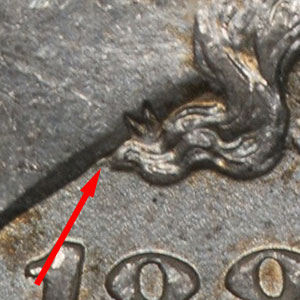 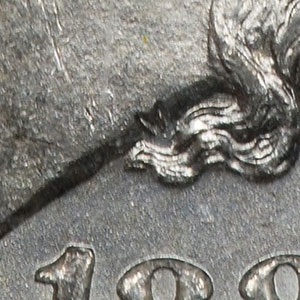 This example is from coin 03739502, an MS 63, VAM 41.  In this example the hair tip is essentially gone, indicating some additional polishing.

There isn't a lot of difference in the two, but enough to notice and make us think that VAM 15 came first. 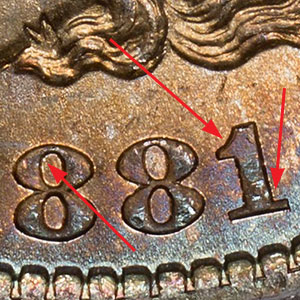 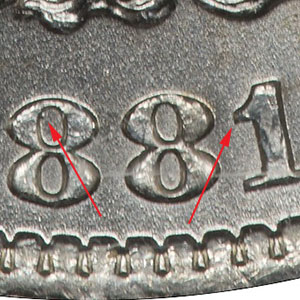 This image is from coin 18580399 a Mint State 62, VAM 15 coin.  The doubling in this photograph is clear at the top but not as clear at the bottom.  The spike in the top of the upper loop of the first 8 is clearly visible.