With Die 8 the left 1 is slightly doubled at the bottom of the upper crossbar, and at the top right of the vertical shaft.  The left 8 the familiar short die chip at approximately 11 o'clock in the inside of the upper loop.

Another minor feature is a slight doubling of the profile from the hair down to the chin.

Die 16 only appears with reverse die a, but with characteristics that can be subtle to recognize at first.

Our analysis of Obverse Die 8  is limited to a single coin, so obviously one we will revisit when we have more examples.  This die appears only on VAM 16 which has a heavily overpolished reverse.  The reverse features are so dominant that they get most of the attention. 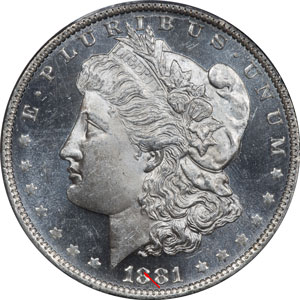 To make this a little more difficult, the one example we have is a high quality MS64DMPL coin where potential perimeter die cracks would have been polished out or the die state is early.  To complicate this even more we know the die was polished at least once.  We can determine this by looking at some other features.  First, the hair curls at the base of the neck have been slightly softened so that they lost a little detail.  Second, there are some reasonably obvious die polishing lines at various locations around Liberty's head.  And last, if the two dies were used and reused in concert then the heavy overpolishing of the reverse die probably occurred at the same time. 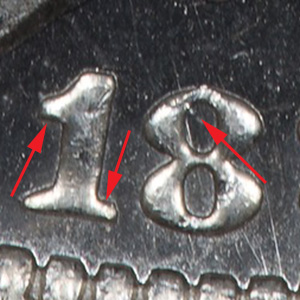 But the one feature this coin does have is the familiar "Spike in 8."  We have initiated a conversation on VAMworld about this one since we would contend that this is a form of die break. 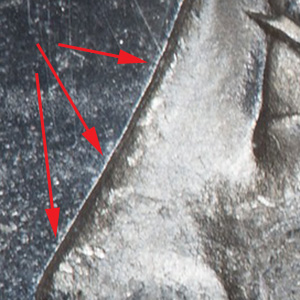