With Die 9 the frequently seen spike in the upper loop of the first 8 is present.  But the distinguishing characteristic is the dash under the second 8.

This is a mark seen on many other Morgan series, and often associated with multiple VAMs.  But with the 1881-O it only appears once on VAM 17.

Obverse Die 9 is paired with reverse die a to made VAM 17, the Dash Under 8 and the only obverse die with this reference mark.  As of this writing we have 19 examples, and 18 of those are mint state giving us a lot of material to work with. 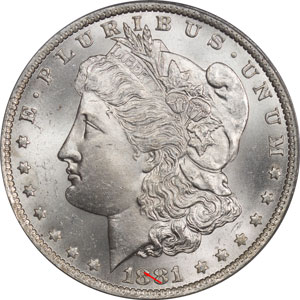 All of the mint state coins are free of cracks toward the rim and only exhibit the "Spike in 8" die crack inside the upper loop of the first 8.  But most if not all of the coins show some signs of die fatigue toward the rim.  In the earliest stages it is found only at about 12 o'clock, and then on other coins it begins to show elsewhere in the fields near the rim.

Taken as a group this might be the cleanest group of any VAM. 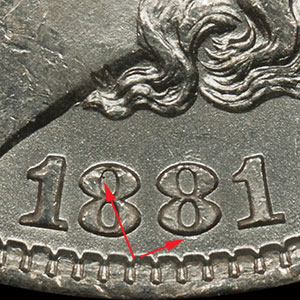