We sent a fresh five coins to LVA last month for his review.  Two are just for clarification, but the others are potential new varieties.

We have about 19 coins at PCGS for crossover analysis and grading.  Hopefully those will be back in June.

We have a small group of 5 coins at ANACS for crossover analysis and grading.

And lastly we have 40 coins packaged and ready to go to VSS for photography and VAM certification.  We also have another 50 coins for eventual grading and processing by VSS.

In all stages another 108 coins are in the pipeline.

With the April returns from VSS there are 468 coins now available on the web site for study or comparison.  There are many more coming (almost 100), it just takes time, energy, and money to get them here.

To supplement the information available on VAMworld and to fill in some blanks directly related to the 1881-O we have included a new Encyclopedic Dictionary.

This will be of help to new and young collectors and we feel like a good starting point to add additional definitions of interest in the future.

Unlike VAMworld we do not have to cover all the different issues, so our focus is a little narrower.

For the second month in a row there was some movement in the value of coins in the 1881-O series.  A portion of this comes from the fluctuation in silver prices and that does effect lower grade coins just a little.  But we think there is also a psychological effect that kicks in with hotly contested political races, so we should see a lot of movement with the ebb and flow of events between now and November.

In the Mint State coins they noted several changes that reversed trends of earlier months.  For grades 62, 62+, 64, and 66 there were slight movements up.  They also recorded movements up in the 64PL and 64+PL.  And then the lower end of the DMPL group also moved up with price increases for the MS61DMPL, MS62DMPL, and MS62+DMPL.  All of these would mirror what we have seen in the marketplace.  They did not record any price movement below the MS grades.

Additions to graded coins is where it might be expected.  We have added a few below AU grades, and there is the steady march with MS62 and MS63.  But there has been some upward movement in graded MS65, MS65+, and MS66, which is surprising unless someone stumbled into a small cache of coins.

We continue to pursue our 1% goal for each category and see few obstacles except where they are so rare that finding them will be a miracle.  Several of the + grades have fewer then 10 coins in existence and even seeing them on the market might be a challenge.  Like the MS65PL, when we see it we may just have to jump at it.

We are working on a new study of the New Orleans Mint that we believe will offer new insights into its workings.  This is a view we have never seen done, so it should be interesting to do and interesting to share.

The study will take most of June and July, but it will produce some interesting reading. 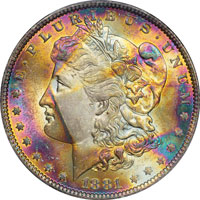 The coin arrived in May and we will probably send it to VSS in the next group.  Because of the toning we want to reserve any VAM opinion until VSS has seen it.

Then late in May we acquired an MS65PL which we thought we might never see.  There are only 6 PCGS certified coins, so when this one hit the market at a very reasonable price we jumped at it.

We have neither the time nor resources to do an in depth study of the gold eagles produced at the New Orleans Mint.  That does not mean that we  have no curiosity about the minting of the coins and their impact on the production of Morgan Dollars.  So when one came on the market at below PCGS pricing we decided to acquire it. 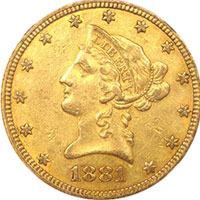 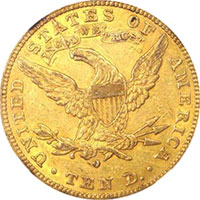 Over the next few months we will do a little research and report it back here.