The documentation on those is now being updated on VAMworld and is already incorporated into our site.  The description of those VAMs are as follows.

All the left and right stars are slightly doubled toward the rim.  As a die marker there are fine raised die pitting dots below the ear.

The date has a doubled 18-1 with the left 1 doubled slightly at the top right.  The left 8 has a flat doubled top outside of the upper loop.  The right 1 is doubled at the lower left of the vertical shaft.  As a die marker there is a fine vertical polishing line on the right side of the upper hair curl.

On the reverse there are about ten mostly vertical fine line die scratch lines in the eagle's right wing with one on the wing opposite the left wreath top being most prominent.

The right 1 is doubled as a strong notch in the middle of the base bottom.  Both 8's are very slightly doubled at the lower left outside of the upper loop.  The left 8 has a short die spike at the top left inside of the upper loop.  EDS shows raised metal chips below 18 from the master die and on the working hubs in and above denticle spaces.  This is the same obverse as VAM 54.

As always our thanks to VSS for helping identify the anomalies and to LVA for his analysis.

This month we added a number of new features to the web site to help with our study.  Some of these we added just to make finding things over time much easier, and others we added to help with our goal of building visual representations of complex issues.

First, there is a new section in the upper menu labeled "Similitudes."  Right now this section mirrors the sections of VAMworld where VAMs are grouped by characteristics, like "Spiked 8."  We built our initial sections on these same groupings but added images to make discovery and identification easier.  There are other logical groupings we will tackle in the future.

We also added a new section labeled "Studies" as a holding place for items we discuss in these news pages that we want to more easily access over time.  Also included in that section is a PDF file for each of our VSS and LVA submissions. 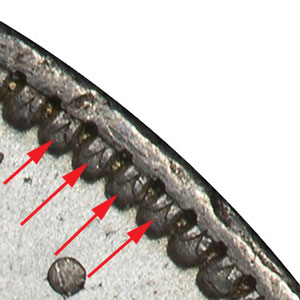 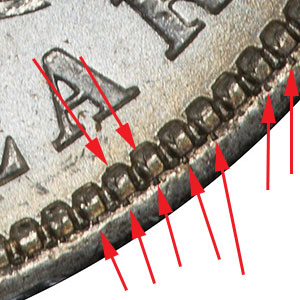 This is a feature we have only started to look for, so we have no idea how often it repeats itself, but in just one batch of 9 random coins it appeared 3 times.  It can also be seen clearly on coins 26241074 and 19005644 from the same batch.  And then again, the New Orleans Mint was not known for exceptional production quality.

To see more examples check our section on Clashed Denticles.  As we have time we will add other coins we locate with these features to the mix.

It is obvious from this web site that we are doing a very deep dive into the 1881-O Morgan Dollar, and that we are serious about learning all we can about it.

Our need for understanding eventually led us to a book by Roger W. Burdette titled From Mine to Mint: American Coinage Operation and Technology 1833 to 1937.  This is the only reference work we have found that deals with both the physical equipment used in coining and the evolution of processes used to create coinage.  The work is throughly documented and appropriately footnoted. 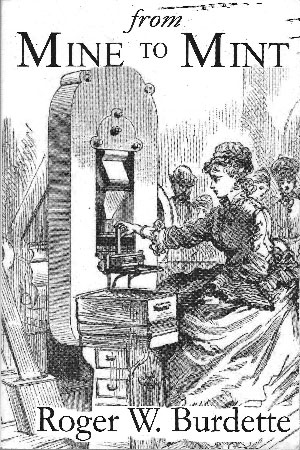 As I was reading I started to turn down pages with facts of interest, only to discover that I had turned down so many pages that the book was becoming "fat" in the upper right corner.

As an added bonus a CD is included with the book that gives you a searchable reference to all the text and facts in the book in both desktop and mobile formats.

If you are serious about learning the details of  the processes that produced the coins and resulting VAMs we collect, then we believe this should be required reading.  If you want to know not just what, but also how various coin anomalies occurred then this is the book.

The book can be ordered from the Wizard Coin Supply web site and we obviously highly recommend it.

We have updated the section detailing the grading trends and values for last year and there are no big surprises.  The bulk of the value in the series is in just the top two grades (65 to 66 including all sub types) with 77%.  Making no judgments on pricing, PCGS would value the 1881-O  series at $4,158,346 as of December.

By number MS 63 grew the most, but it always does.  Prices remained relatively flat, with coins below MS holding to slightly declining in value.  Only in the top two grades were there any significant price movements, and the auction prices for these coins moved around, but was generally up.

This collection holds 39% of all coins from grades 01 through 45.  So we continue to provide good value to anyone who would like to study grading.

Our collection is obviously aimed at some significant accumulation of 1881-O coins for study and we are on pace to include no fewer than 1% of each PCGS grade.  There are areas where we just have to wait on the market to even see a particular grade, but they are coming slowly but surely.

Right now we are focused on keeping our 1% of grades MS62, MS63, and MS64 where most PCGS grading occurs for the 1881-O.  At the same time we are moving up the ladder into MS65 where we need 7 coins for the 1% goal.  All of our MS65 coins are not on the web site but we are up to 4.  Our progress is slowed by price, but also VAM.  We are trying to spread the varieties around in these upper grades and often they repeat when available or the seller is so fixed on an unreasonable price that acquisition is not smart.  We have our eye on a MS65+ so hopefully this will inch us toward a complete set of grading coins.

Some of the VAM issues in the upper grades can be easily seen with VAM 28.  There is a high probability if you are acquiring either a PL or DMPL coin it is a VAM 28.  But for many grades there are fewer than 100 graded coins and trying to hit both a specific grade and VAM can be very expensive if you are grading raw coins.

On the overall VAM front we now have representative samples of just over 80% of the VAMworld listed varieties in our collection.  Assuming the normal 80/20 rules apply the last 20% will be the most difficult, but also the most satisfying.

The coin totals on the graph to the right reflect 20 coins in the process of being added to the web site, but exclude coins where the VAM is not attributable or still under evaluation.  By the end of January there will be 400 coins in the inventory that are shown on the web site.

For those 400 coins there are about 3,200 images for analysis and education.

Over the next few months this number will move closer to 500 coins, but then will slow dramatically as we attempt to tackle the top grades.