This month we are slowing down a bit to make changes to the web site and to cross reference those within the site.

We received the second group of coins back from Leroy and he has provided insight into a number of VAMs, especially the VAM 1L which has a die clash error with a $10 gold eagle.

A Topic of Debate

It is likely that the discussion about VAM 1L will go on for a while.  The original discovery coin has changed hands and we are trying to locate it to confirm the die clash.

JB believes the dies to be the ones used on VAM 8, and indeed there are characteristics of VAM 8 readily visible on the VAM 1L.

The feature under discussion is the raised dots between the mint mark and the ribbon. 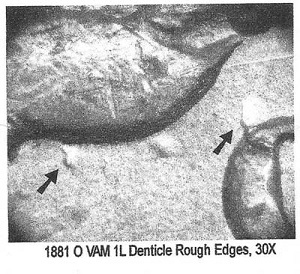 Are these dots from a die clash with a $10 gold piece as the press was changed for coining, or is this some other defect in the die or the planchet?

From our side we have a number of VAM 8 coins twenty-two to be exact.  There is a small feature on the image above of a horizontal line that is just above the raised dots.  Of our twenty-two coins, five exhibited this feature.  Four of the five are DMPL coins with the fifth being an AU 58 that we could tell was a highly polished coin before being circulated.

But the counter argument is that the dots are a faulty planchet and there was no clash.  Until the discovery coin is located, or a second coin discovered it is unlikely that we can resolve this discussion.

So for now VAM 1L lives on which is healthy for our hobby.  It sparks debate and study, and helps illustrate what VAMing is all about.

The full text of Leroy's letter in PDF format can be accessed here.

In our last submission to Leroy we asked him to review four coins as possible new VAMs.  These are indeed three new discoveries. 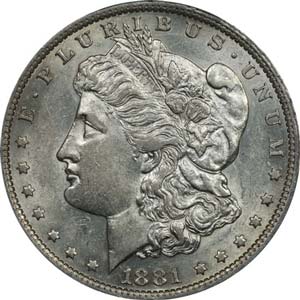 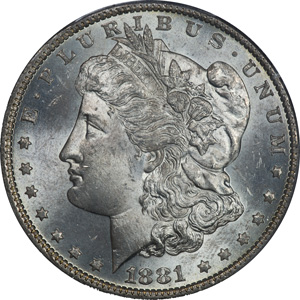 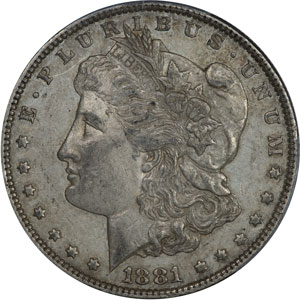 Leroy's letter concerning these discoveries can be accessed here.

Also in the mix with the three new VAMs is the reclassification of VAM 1H to a second die of VAM 40, becoming VAM 40.2.  The similarity of these dies can be seen in our study of die cracks since they match exactly.

This reclassification confirms the comments on VAMworld, so thanks for the pickup of those features by those who noticed.

We are sure there are others that the die study will point to in time and when they arise we will send them in to Leroy for confirmation.

No one submitted a correct answer to the cipher I proposed, so I am ending that offer for now.  In a few months when I have finished all the updates to the web site I will try again.

The Document is the Declaration of Independence.

The numbers relate to the word count within the Declaration.

When it becomes necessary to prove the self-evident truths of any new declaration we do so with respect, experience, and purpose.