Comments:  When we get a coin that is this heavily toned we try to look at the opposite side to see if we can get a hint as to its quality.  The reverse of this coin tells us that this might be a Mint State 64 or better coin.

The VAM 1E characteristics are there, and we have the impression that under the toning there is a really nice coin with minimal bag marks.  But some graders see toning as a reduction in eye appeal and that could contribute to the MS 63 grade.

There is a strong hint about the life of this coin on the obverse, and to some degree supported by the reverse.  On the obverse there is a box shape that can be seen from 7 o'clock up to 10 o'clock, and then down in the direction of 5 o'clock.

It is highly likely that this came from a roll of coins, and this was an end roll coin.  Where the coin wrapper was folded over to hold the coins in the roll there is less toning, and where the coin was left exposed in the center there is more.  The lack of toning on the reverse in our opinion reinforces that this was a roll coin.

Since coins were stored loosely in bags, at some point this coin was rolled and probably sent to a Mint to be distributed.  But since the coin is still Mint State it presumably never made it out of the Mint.  Another possibility is distribution to a bank who held it in the same way.

We think this is a third cycle toned coin where the golden yellow is coupled with magenta and blue.  It could also be a second cycle coin with the same color pattern, just in a lighter shade. 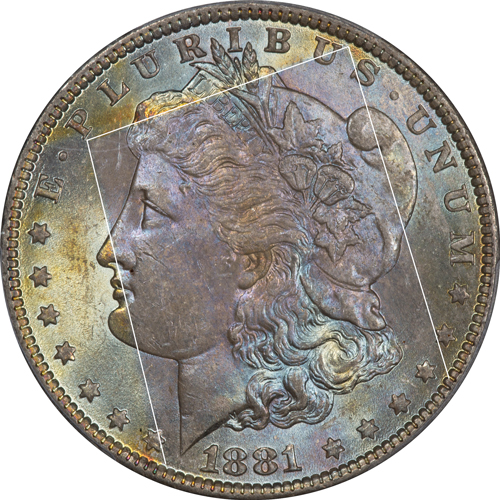 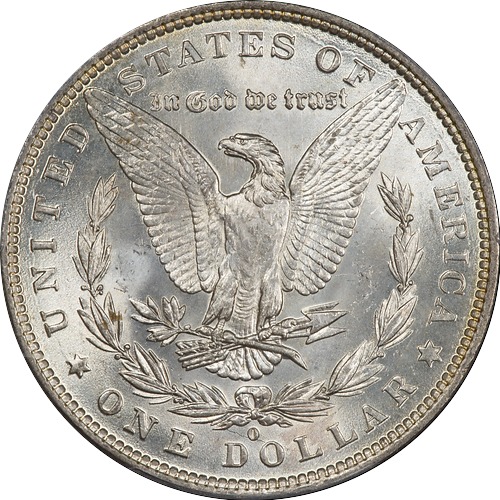