As our collection has grown the span of grades for each VAM has also grown.  This gives us the somewhat rare ability to compare how a VAM looks as it wears.  For the VAM 5 - O/O Right,  Double 1, we have 30 coins in 12 different grades.  The grades range from Extra Fine 45 to Mint State 64 DMPL, with duplicates in several grades.

As coins wear, identification of VAM characteristics can increase in difficulty as key features wear or become obscured with dirt.  Unlike the VAM 1D, the VAM 5 can be easily obscured with wear and in particular dirt.  Once the mint mark gets filled in with dirt then seeing the overstrike can be difficult to impossible.  But with the VAM 5 there is an identification trick that makes this a "one and done" type VAM.  (Also see our comments at the bottom of the page on naming convention.) 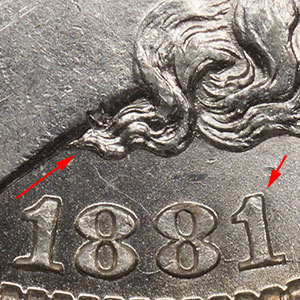 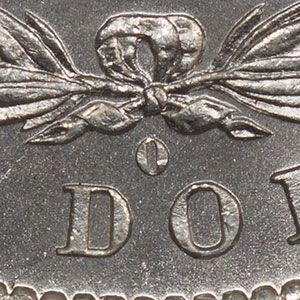 These photos show what the hair, date, and mint mark should look like as designed by the engraver.

Since many of these examples are Mint State coins there should be little difference in the appearance of the coins until we get below Mint state. 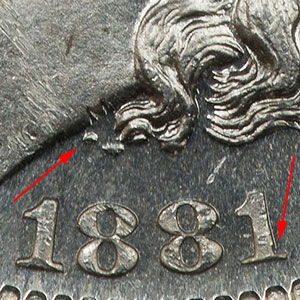 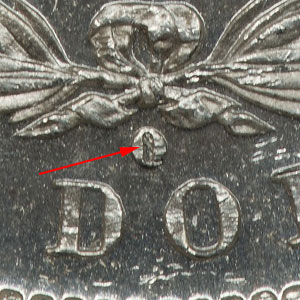 On the obverse there are two identification features, the doubled right 1 with a notched look on the right, and the polished out hair curls.  The hair curls are the "one and done" feature because no other 1881-O has hair that terminates in this style.

On the reverse the overstrike in the center of the mint mark is also obvious and easily identified and can also be used as a "one and done" feature. 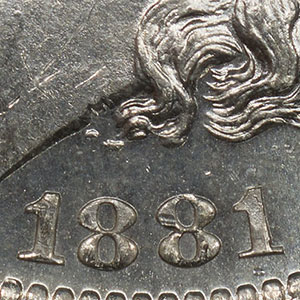 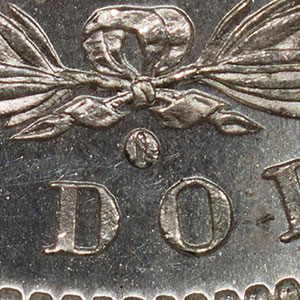 This is a Mint State 64 coin, PCGS 27855650.  This coin clearly illustrates the key features of the VAM 5 and we see no difference between these identifying features and the one above. 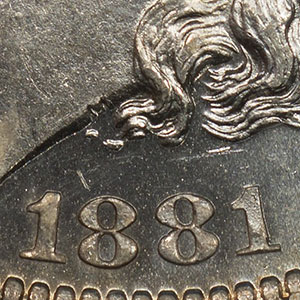 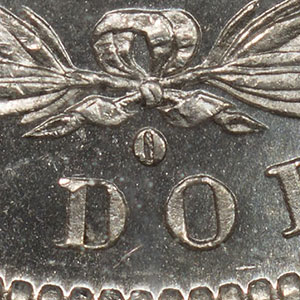 This is a Mint State 63 PL coin, PCGS 11625488.  This coin clearly illustrates the key features of the VAM 5 and we see no difference between these identifying features and the one above. 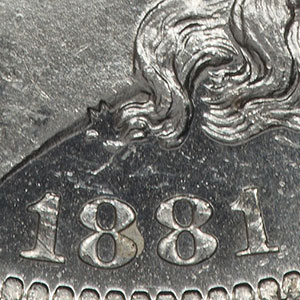 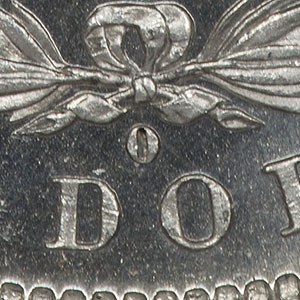 This is a Mint State 63 coin, PCGS 29960336.  While this coin clearly illustrates the key features of the VAM 5 the overstrike debris in the middle of the mint mark seems weaker.

There is some discoloration on the first 8 in the date, but this is a substance on the coin and not a strike or die issue.  The double right 1 and polished hair curls are obvious. 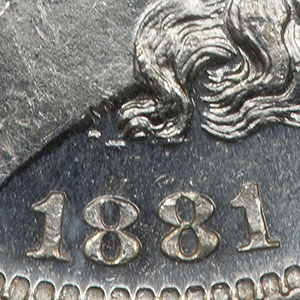 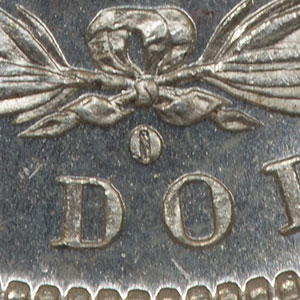 This is a Mint State 62 PL coin, PCGS 11277290.  This coin clearly illustrates the key features of the VAM 5 and the overstrike debris in the middle of the mint mark is strong.

There is some cloudy discoloration between the first 18 that we believe to be grease left on the die. 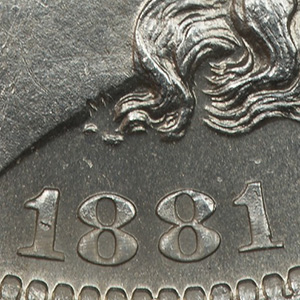 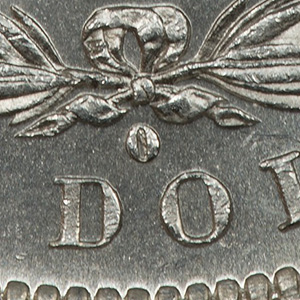 This is a Mint State 62 coin, PCGS 33482808.  The unique coin features are actually a little easier to see in this coin.

At this grade some of the luster is gone from the coin and the features stand out a little more.  This coin has relatively few bag marks in the key areas and this also makes analysis a little easier. 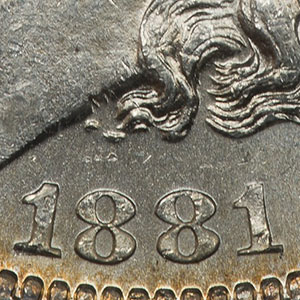 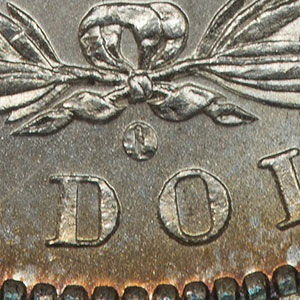 This is a Mint State 61 coin, PCGS 26119618.  The coin obviously has a little toning and we chose this coin for that reason.  Sometimes toning helps because it gets in the crevices of the devices, but in this case it adds little.

Even at the lower end of the Mint State range nothing is obscured from identification. 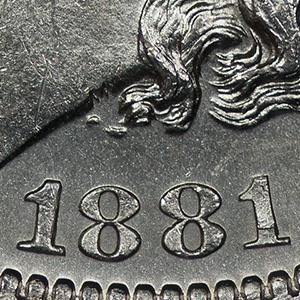 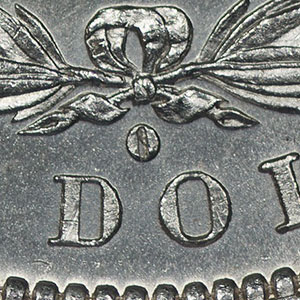 This is a Mint State 60 coin, PCGS 82490317.  This is a coin that is on the upper end of the grade, so there isn't a lot of difference in this and the MS 61.  But the gouge in the middle of the mint mark looks a little abbreviated, much like the AU 58 example below. 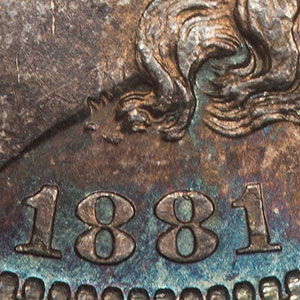 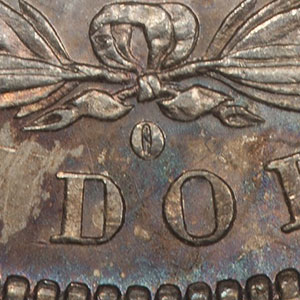 All of the key identification features are easy to identify and it this stage there is just a little wear, and this coin is very close to being an MS 60. 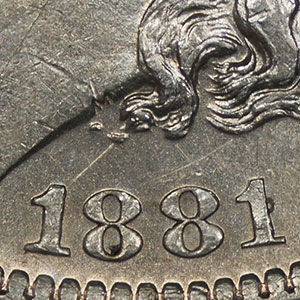 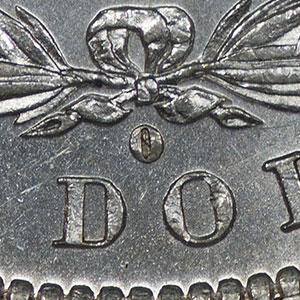 We were fortunate to find an AU 55 coin with a clean mint mark because at this stage it could be obscured with some dirt.  This coin is PCGS 13206096.  The obverse is a little discolored, with a clear band running diagonally through the coin.

All of the key identification features are easy to identify and at this stage the doubled 1 and mint mark gouge are still visible. 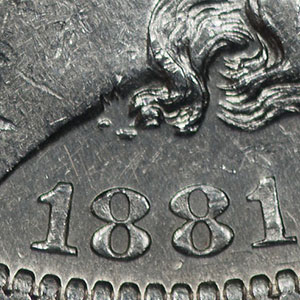 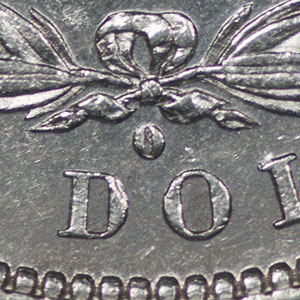 This coin is PCGS 82490272.  Even at grade AU 50 all the features are clearly visible, and we were fortunate to avoid any dirt in the mint mark area.

The hair curls show little if any wear at this grade, which is somewhat remarkable. 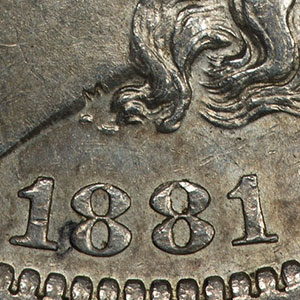 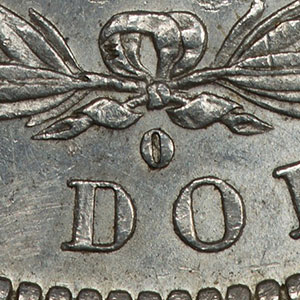 All the features are clearly visible.  The hair curls show little if any wear and continues to encourage us that we can identify coins in a much lower grade.

Within the 1881-O series this is one of the more interesting VAMs because of the discussion/conflict over "Just what is that inside the mint mark?".  To some it is an S mint mark that was over struck to  make the O more prominent for use.  For others it is a crooked O that was corrected but left the diagonal marks inside.  And then for a few it is just some "diagonal stuff" or a gouge left inside and not cleaned up before using the die.

So how has this been described by experts over the years?  Here are some examples.  As early as 1971 it was labeled as "O/O Right, Double 1," which is the correct designation.  But PCGS has also labeled it as "O/O", "O/S" and "So Called O/S" from time to time.  NGC currently labels the coins as "Gouged 'O'" and ANACS only as VAM 5.

The O/O Right is critical for the correct description because it refers not to the "stuff" inside the mint mark but the fact that the mint mark is doubled as a thin line on the right outside.