The 1881 Morgan Dollar minted in New Orleans is but one issue in the long and storied history of the series.  For much of its history the coin has attracted little attention, but with the rise of popularity of the Morgan Dollar has come a new appreciation for this coin with seventy or more different unique variations.

Morgan dollars are so designated because they were designed by George Morgan, a skilled engraver who came to America from England to augment the skills of existing Mint engravers.  During his career with the United States Mint he created dozens of  coins and medals, but none as prominent as this dollar.

Authorized by the Bland-Allison Act in 1878, the creation of Morgan Dollars has had a checkered past.  The background of the Act and accompanying actions required by it has created one of the most interesting stories in the history of our nation, and perhaps the most coveted coin for collectors.  Under the Act the Mint was required to buy domestically mined silver at inflated prices to create coins for circulation and for backing of paper money.

For much of the life of the dollars they languished in the vaults, hallways, and back rooms of the Mint.  They were too heavy or bulky to be easily carried in circulation, and so plentiful that they became a nuisance to the Mint.  The unconventional storage conditions, mintage quantities, inconsistent minting quality by branch mints, and other factors have all converged to create the unprecedented variation in strikes that attract many collectors.

But even stranger was the Pittman Act of 1918 where 270 million Morgan Dollars were melted, the bullion sold to England, and then replaced with even more Morgan Dollars.  It is the Pittman Act that adds to the mystery of collecting Morgans.  No one is quite sure how many of each issue were melted, so rarity is always a topic of debate.  But it is believed that significant quantities of 1881-O Morgans were destroyed.  Only Congress can possibly understand melting coins into bars to send to a foreign country, and then minting more coins to replace them.

The obverse of the coin features an allegorical head of Liberty, believe to be modeled after the daughter of a friend of George Morgan.  The design went through several modifications before appearing as we see it today.  According to at least one source, Morgan wanted a model that was more emblematic of American facial characteristics, and that led to a more exhaustive search than normal.  The obverse also contains the date and the familiar Latin phrase "E PLURIBUS UNUM."

The reverse of the coin features an eagle with its wings spread, the mint designation, arrows, a ribbon with bow, clusters of olive leaves, the phrase "In God We Trust," and the designations of "UNITED STATES OF AMERICA" and "ONE DOLLAR."  The eagle was a source of early criticism with many likening it to a turkey.  The large quantity of features on the reverse have all served to create many varieties.

All Morgan Dollars come in three different broad categories of quality or strikes.  There are deep mirror proof-like, proof-like, and the normal circulation coins usually designated as business strikes.  Rarity by quantity is almost always in descending order from deep mirror proof-like to business strikes.  However, for most Morgan Dollars rarity begins to reappear in grades below MS 60, and in grades below XF 40 fewer than 10 coins have been identified for any one grade.

Although there was one reported 1881-O proof coin, none have surfaced and it is generally believed that no proof coins exist.  For certain there are no PCGS graded proof coins.

To see the full features on the coin and how they are designated by collectors click the Features link in the menu. 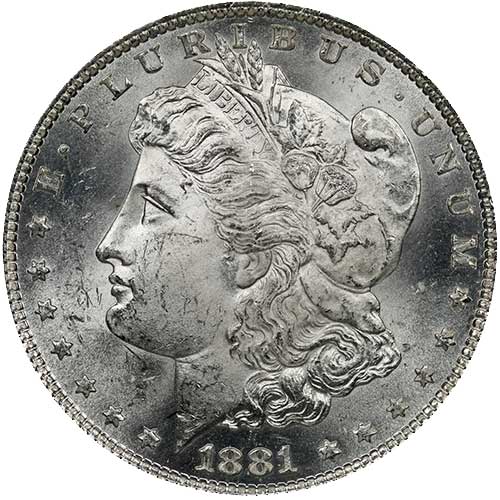 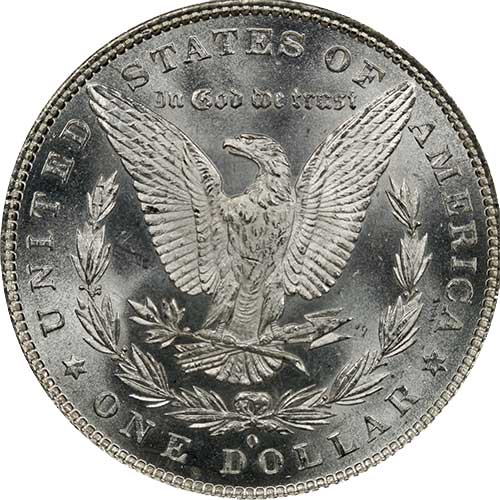