Comments:  Obviously a heavily toned obverse coin, but how is an interesting discussion.

The coin seems appropriately graded at Mint State 64, especially when examining the reverse.  The reverse might actually rise to the standard of an MS 65 coin.  But the coloration on the obverse obscures any field reflectivity or clarity and it would be difficult to rate the coin any higher.

There is a striped area running through the coin from about 5 o'clock up through 10 o'clock.  This area has an earlier cycle of toning, meaning it was protected from the reagent that toned the other areas.

There is an almost square corner running through the upper lip, so whatever protected that area had some rigidity.  We believe the coin was an end roll coin where the obverse was exposed while the reverse was completely protected from toning.  But the pattern on the obverse does not follow that of other end roll coins we have seen.

A portion of this coin around the cotton bowls has a look that is almost like fire.  The golden tone is retained down in the recessed areas of the hair and when contrasted against the opalescence outside that area it creates a really lively effect.

We place this coin in the late third and early fourth cycles because the opalescence is mainly deep purple and deep magenta.  The golden color around the cotton bowls is indicative of a deep yellow/gold, also late third cycle colors. 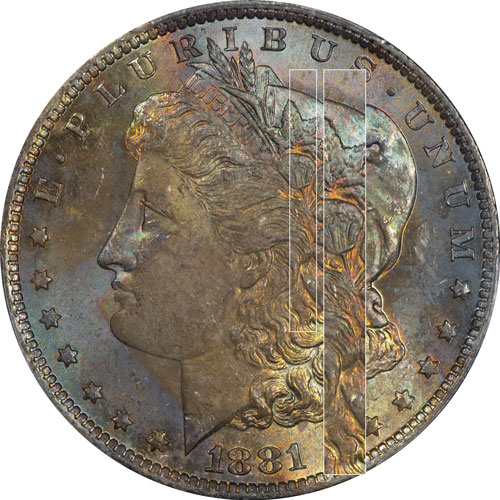 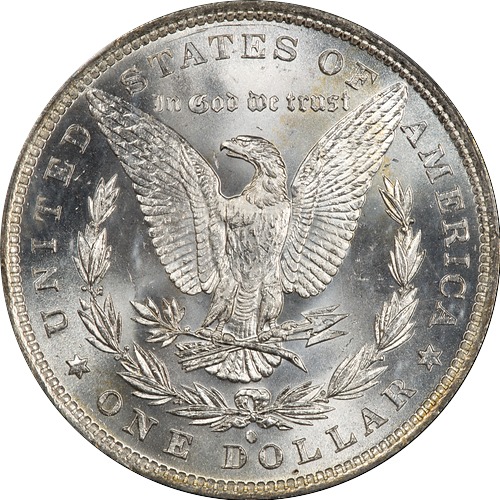