Comments:  We have an advantage that the graders lack in our ability to drop out the color on the coin's surface an look beneath at the coin.  This coin has a lot of color changes and it makes examination difficult.  When we dropped the color out we see a coin that probably should have graded lower.  The fields are all right, but there is a lot of scaring on the devices and we just think it is more of an MS60.  The reverse is better, but would not carry the day in our opinion.

The date doubling is visible on the toned images, as is the pinned wing.

All of this said, this is a nicely toned coin and a good addition to our collection.

Since we believe this to be bag toning over an extended time, and knowing its origin, we can visualize this coin languishing in some damp vault in New Orleans.  It was probably shielded from moisture some because the blotches of color/discolor often seen are not there.  She turned out nice, but may have had a hard life.

We did not blow up a section of the obverse because the color spectrum is the same on both sides.  Toward the center of the coin there is less toning and the colors are back in the earlier stages of toning.  But moving toward the rim we see progressive toning  that moves from magenta to blue and this is the correct progression.  The iridescence in the color is often indicative of slow, bag toning. 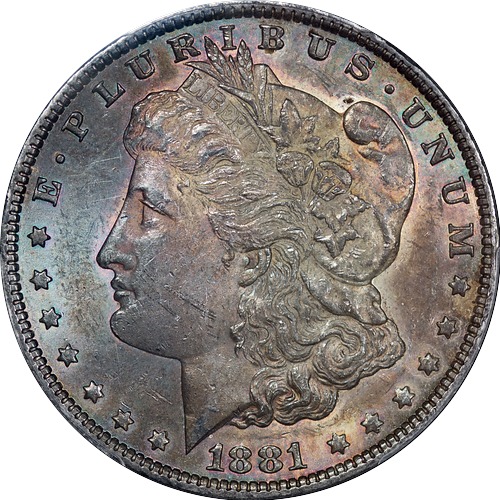 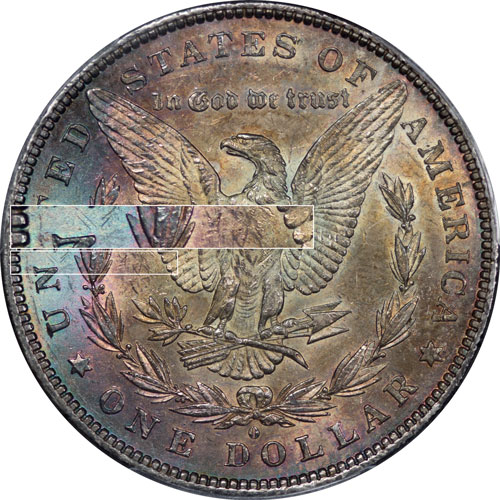