Many if not most collectors of United States coins will eventually get around to collecting Morgan Dollars.  Morgans are one of the most popular coins and collected because of their beauty more than their intrinsic value.  The coin was designed by George Morgan who was hired away from the British Royal Mint for his skill as an engraver, and the coins eventually became known by his name. 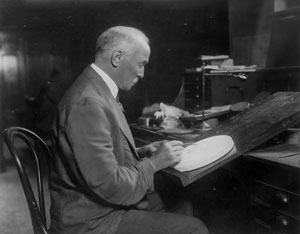 Morgan Dollars started production in 1878 toward then end of the Reconstruction Era following the Civil War and remained in production through 1904.  A final series was created in 1921, but only for that year.

There is a lot to be learned about history for junior collectors through the study of Morgans.  While removing everyone’s smart phone from their hands is impossible, it can be a way to search for and follow Morgans on the Internet.  It is certainly a more positive and educational than merely playing video games.

This web site is designed to help everyone from the least experienced to the most experienced.  Junior collectors will find a lot of help and information as they learn more.  The web site expands almost daily as our collection expands.  We also do studies of specific topics of interest and these are added to the site as they are completed.  By linking all our data to VAMworld, the opportunities for learning are limitless.  This is the largest collection of a single variety we are aware of and we hope you and your junior collector will find something here that sparks interest.

The 1881-O and Collectible VAMs

We are obviously partial to the 1881-O and we will use it as an example of how to help a junior collector get started.  We selected it for our study coin for a number of reasons, but cost and availability were obviously factors.  There are only three coins that are considered to be “special” enough to draw attention, and all three can be identified by a single trait.  If, as a parent, you are not a collector or a VAMer then helping your child identify these coins will be pretty straightforward. 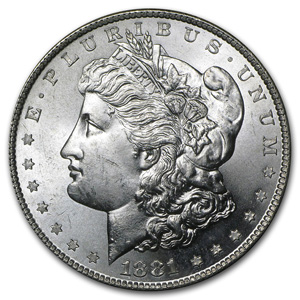 The three 1881-O coins considered to be significant errors are the VAMs 1D – Pummeled “Flaky” Eye;  5 - Doubled 1s, O/O; and 27 – Doubled Ear.  Two of these are easily identifiable through pictures on eBay and one is a little tough.

Clicking on the title of the three VAMs below will take you to their specific page.

You will see the VAM 1D Flaky Eye also referred to as a Pummeled Eye.  These have evolved over the years and seem to be interchangeable names.  The name originates from a unique pattern of metal on and in front of the eye that creates horizontal striation marks.

We actually did a little study comparing this coin at different grades, so if you want to know how this will look you can see it as the coin wears by clicking here.  The only thing about identifying this coin is to be sure you are not looking at normal marks that come from wear or from other coins coming in contact the one you are evaluating.

As opinions about VAM 5 have evolved over the years you will find that it is described differently.  Names like “O/S,” “So-Called O/S,” “O/O,” and “O/O Right, Doubled 1” all refer to the same coin variety.  This happened because of a little debate over just what is inside the mint mark.  It could be that the O mint mark punch was used to overstrike an S mint mark so the die could be reused.  It could also be that there was an O mint mark that was stamped in crooked and then corrected with a second, straighter punch.  In recent years another characteristic of this coin has been added and that is the doubled second 1.  But there are even more identification traits that are available and this has become one of the easiest top VAMs to find, at least for us.

The 1881-O Double Ear VAM is easy to identify when it is in hand, and very difficult to identify on eBay or other on-line web sites from photographs.  The reason this one is so difficult to identify is the way the area behind the ear reflects light, even from the best photographs.  There is a flat area behind the ear where the hair line is separated from the ear.  This area reflects and often looks like a doubled ear.  This is one that if you think you see it, you probably don’t.  If there is one coin that you need to search for at a coin show where you can actually hold the coin in your hand, this is it.  Until then it is difficult to find on-line unless it has already been identified, but then it will be expensive.  This coin is on the HOT 50 list of desirable coins.

Most serious collectors of Morgan Dollars eventually will look into the collection of sub-varieties known as VAMs.  The acronym VAM is derived from the last names of the two men who organized this area of collecting (Leroy Van Allen and George Mallis).  Any collector of Morgan Dollars who turns to “VAMing” quickly learns that there is enough variety, challenge, and intellectual stimulation to last a lifetime.

But with a little help even junior collectors can collect VAMs and begin to understand and appreciate this area of coin collecting at a very early age.  When explained to a young collector as nothing more than very interesting errors, any collector can appreciate and understand a VAM.  A VAM originates from an error in a die used to strike a coin, not in the striking process. 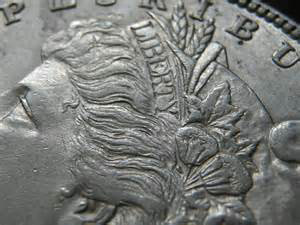 Believe it or not, most dealers and especially eBay dealers or sellers do not know how or do not take the time to identify a coin’s VAM.  VAMing is often viewed as too difficult or time consuming and the dealers are really focused on grade and volume.  Never mind that a lower grade coin might be worth, five to ten times as much if properly identified, volume is their focus.  So for even junior collectors an AU 58 coin is within reach and may not have been identified properly as to VAM.

But like most things in life, the sooner you start accumulating knowledge the better.  A young coin collector who learns the ins and outs of Morgan Dollars can have a lifetime of collecting and discoveries.

We are always surprised when we find adults who have never seen a silver dollar, so to many junior collectors this will be a great journey.

How to Use This Web Site

There are significant resources contained within this web site that will help collectors of all ages and skill levels.  Of particular interest to young collectors will be the total collection link where over 400 coins are presented side-by-side and grade is easily identified.  Teach a young collector to actually hold up a coin to their screen and to compare it to professionally graded coins.  Teaching grade by example is much easier. 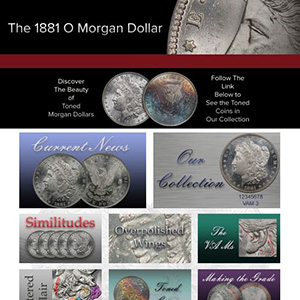 In the web site we give the history of the Morgan Dollar and controversies that surrounded its creation and manufacture.  We also discuss the various intricacies of the coin and in particular the process of VAMing.  Hopefully this is a site for collectors of all ages.

Although we do not recommend buying graded coins for very young collectors they will eventually have both appeal and interest.  Some of the benefits of buying a graded coin are obvious such as an established grade, protection, and in some rare cases they are VAMed. 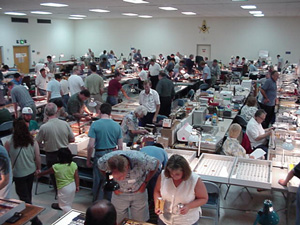 But graded coins carry an extra price tag and for very young collectors there are other options.  Most dealers at coins shows will have a box of lower grade coins that can be picked over at much lower cost.  Obtaining coins in this fashion also keeps a bit of the treasure hunt aspect to the hobby.

As a junior collector will eventually discover, there is no limit to the number of VAMs or a limit to the availability of Morgan Dollars.  Hundreds of millions of Morgan Dollars were minted and we believe that more than half remain.  Even with the melting and other destruction of Morgan Dollars when silver prices rise, the supply seems limitless.  There are date and mint combinations that are rare, but not the Morgan Dollar in general.  With our 1881-O there are usually somewhere close to 800 coins available on eBay daily.  In total there may be 55,000 Morgan Dollars for sale there all the time.

So how do you get a junior collector started?

The benefits of coin collecting are often overlooked in our modern, high tech world.  But the reasons to involve younger collectors in coin collecting have never been higher.

Our modern world is often given in sound bites and youngsters are not learning the skills needed to focus on difficult, in-depth topics.  This lack of critical thinking will not bode well for our future and there is much in the coin collecting world that builds the skills needed for success.

Just to name a few of the benefits you can:

Time and effort spent teaching the ins and outs of collecting to a young person pays dividends not only for the collector, but for us all. 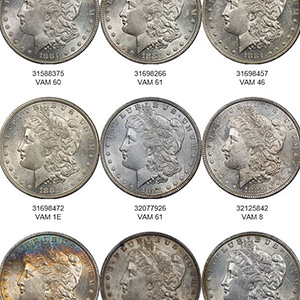 Look around this web site and find the information on United States history and how important the Morgan Dollar was to the monetary development to the nation.  If you live in a city that has or had a Mint then a trip to the Mint is an educational treat.

Once a young collectors gets past the basics there is an endless learning experience in Morgan Dollars.

So where in the world do you find instructional help?  Well, with the Internet the possibilities are virtually limitless.  The real issue is "Out of all the possibilities where do I Start?"  Here are some thoughts: