For the most part all of the U. S. Mints were organized in the same way.  This probably had some logic because the jobs were similar.  But it also speaks to government logic and wanting to have things looks the same everywhere.  This may or may not have been an efficient way to do business.  The Treasurer's Report lists only four departments, with some logical groupings by job functions.

We like to think of the General Department as management, but it was more than that when one looks at the job descriptions.  It was the top management above the department level, but it was also where jobs that applied to multiple departments were assigned, or what we might list as shared resources.

Jobs like carpenters and blacksmiths would obviously be used by several operations in other departments.  Functions like the doorkeeper, yardman, scrubwoman, watchmen, and fireman were functions managed centrally to the benefit of the Mint as a whole.

There were 25 listed positions and 33 employees.  The General Department was obviously management with 6 of the 10 salaried employees at the Mint.

Assistant to the Cashier

The General Department was located in many places in the building because of the shared resource nature of many of the jobs.

The Assayer's Department had the responsibility of determining the purity of raw gold and silver, and then certifying that purity beyond their department to others.  For Morgan Dollar planchets a purity of 90% silver and 10% copper was needed.  The assay process involved strong chemicals and heat, so the operations needed to be in safe locations.

When the Assayers were receiving ore for processing then they were directly in the coin making process.  However, at other times it was their job to certify the purity of planchets and coins.  These certifications could be to the local Mint Superintendent or further up the line in the Treasury Department.

The Melting and Refining operation is difficult work in the New Orleans heat.  Of all the workmen we need to appreciate these men and their work conditions.  Just about everything in their work environment involved working around a furnace or fire.

This was also a smaller department with only 4 different jobs and 17 employees.  Most employees held the position of Workman which would have covered a number of duties.

The importance of the Coiner's Department cannot be exaggerated.  This is where all the effort of the other departments came together and made quality coins.  While dependent on the work of the assayers, melters, and refiners, it was the coiners who turned the raw materials and work product into a finished product.

The Coiner's Department was the largest and logically should have been there were 16 different jobs, but a total of 55 employees.  Since a large number of both workmen and adjusters were needed to process the coins in a timely manner.

Retiring Room for Drawers and Cutters

The actual Mint building was an imposing structure.  The front facade was 282 feet long and the building was three stories high (54 feet).  It was made from brick with  a wide center portico that had six round brick columns on granite bases.  The gabled roof was clad with Welsh slate.  The rear had an open piazza for each story with cast iron columns, but the whole area was secured with iron bars to protect from unwanted rear approach.  As a generalization, the heaver your equipment the lower your placement in the building.  It is a little difficult to calculate, but the structure looks to be close to 70,000 square feet including outbuildings. 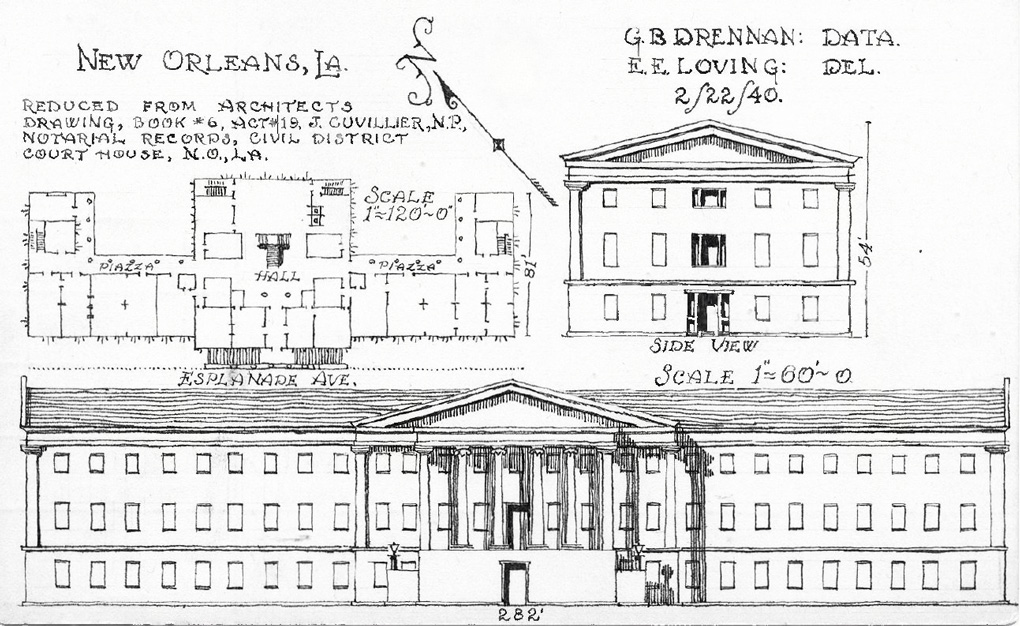 In the 1960s several architectural surveys were made and the original building specifications recovered.  These documents can be viewed at this link.  This makes for interesting reading since it gives one some insight into constructing a building that was largely a manufacturing facility, but also one that had to represent the stability of the Country's currency.  Click here to view this document in PDF format.

Just a few excerpts from the architectural survey report of interest.

The Foundation is at its lowest level is apparently planks laid in a crisscrossed manner in a four foot wide trench.  On top of this was laid a three foot thick brick wall.

The Sub-basement is set at the water-table level and is made from granite blocks that are one foot thick and from six to eight feet long.  It completely surrounds the building and apparently separates everything in the building from the water-table.

The Basement level is made from three foot thick brick walls.  The floor was first created from a layer of gravel and sand and then covered in three inch thick flagstone.  Then around the perimeter of the floor there was a row of granite blocks one foot thick and one foot deep.  All windows were made of heart pine with granite sills and heads.

The Principal Story had brick walls that were 27 inches thick.  Floors varied from flagstone to pine based on function, and many rooms were outfitted with fireplaces.  Like the basement, windows had granite sills and heads and were made from fine pine.

The Attic Story had brick walls that were 18 inches thick (notice the reduction in wall thickness an corresponding weight as you go up).  The ceiling was 14 feet high and the rooms outfitted with fireplaces as needed.  The floors were either flagstone or tongue and groove pine.

Even with all this "heft" in the structure repairs had to be done over the years for leaning walls, cracking brick, and other structural issues.  Roman style arches reinforced much of the internal walls on each floor to accommodate the weight.  The necessity for control of materials required every area to have its own vault, therefore vaults are the most frequent thing seen on the floor plans.  There were some structures attached to the rear of the building to isolate fire from the main structure.

Pristine blueprints of the building have apparently not survived, but those that have can be viewed by clicking here.

Finally, the Sanford Fire Maps of the era give an aerial view of the property and major features.  They can be viewed by clicking here.