During May 2015 some opportunities became available in the MS64 and up grades, so we took advantage of those when affordable.  We also found a number coin or two below those grades, but they were not our primary focus.

We also received back from PCGS a group of 21 graded coins that range from AG03 to MS63.  These will be going off to VSS for evaluation and photography in June.  This group will significantly raise the number of PCGS 1881-O coins below AU grades and give us a more in depth illustration of the mid to lower grades.

The mid to lower grades will continue to be an area of focus for our web site and for VAM analysis.  Having "VAMed" a Poor 01 it is difficult to believe you cannot find an example in each grade, despite the wear.

If you have ever worked on a lowball set you know how difficult it is to have the PO01 to AG03 grades certified.  There are so many ways to disqualify a coin from grading at this level that having one is a real treat.

We also have a group of ten coins being reviewed by LVA and we hope these result in some new findings.  Those results will be posted on VAMworld when they arrive.

With any Morgan Dollar the question of rarity is always an issue.  From Mint records we can pinpoint original production quantities, and therefore rarity at that point.  But beyond the minting figures the survival rate becomes as much speculative as fact.

With these caveats we have tried to make some reasonable estimates of the survival rate for the 1881-O as well as New Orleans minted Morgan Dollars for all years.

First, in the year 1881 Morgan Dollars were minted in San Francisco, Philadelphia, New Orleans, and Carson City.  In that order the mintage figures in millions were 12.8, 9.2, 5.7 and 0.3.  So this places the New Orleans coins as the second most rare for 1881, but the Carson City is rarest by a wide margin.  This rarity is reflected in the PCGS prices and in most narratives.

So then there is the question of how rare is the 1881-O with regard to other New Orleans minted Morgans.  As the chart to the right shows, the 1881-O coins ranked in the bottom half of all New Orleans Morgan Dollars minted.

When we take that same data and present it by year the variation in production by year becomes evident.  When the Mint was reopened in 1879 the production ramped up steadily until 1888.  Then as total production numbers began to be reached the production fell steadily until 1896.  Also from these two charts it is obvious the the years 1893 and 1895 should produce the rarest coins, and this is the case.

But then we begin to rely on mint reports, expert observations, and speculation to try to figure out just how many coins survived for each year.  Please see below the Survival Chart for an explanation of our methodology.

In the group of acquired coins in May is an MS60DMPL in an old "Rattler" holder.  Typically grade 60 coins are difficult for us to find, and there are only 23 DMPL coins in this grade.  It is just too easy for the graders to default to either AU58, MS61, or MS62 and still be directionally correct.

We will also have some fun with this coin.  Typically when a coin gets to MS64DMPL it is a pretty nice coin and does not make it past the graders with this type problem.  But the bottom half of the second 8 is about 80% missing.

It could be a planchet flaw, or a real find; but either way it is a very interesting coin.  Normally we would think that this is merely a coin where something, like grease, filled the die in the strike process.  But this coin has a small mark indicating the field level within the missing eight, and then the missing portion continues to extend down deeper into the coin.

We have a large quantity of coins out for evaluation, 100+, and it is unlikely that we will post them before the end of the month.  As in May we believe there are a few discovery coins, but only time will tell.  As quickly as we can they will be analyzed and posted.

From our start one of our primary objectives has been to collect and share information about the 1881-O Morgan Dollar.  By extension, we hope to create more interest in Morgan Dollar collecting in general, and in VAM collecting specifically.

One way to measure if you are getting some traction is through web site visits, and we feel like we are starting to get some traction.  Our focus is so narrow that we are never going to drive great traffic, but we can begin to measure trends and reach. 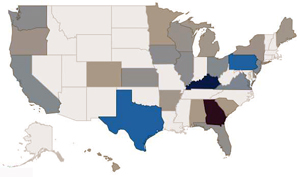 During May we received  443 visits from 28 different countries.  We put no real weight on any but the United States where we received 291 visits from 27 different States.  Hopefully these are either current collectors with new or renewed interest in Morgan Dollars, or new collectors seeking to understand this very specialized area of collecting.

For whatever reason we hope you will share our site with anyone who might help advance the topic of Morgan Dollar VAMs. 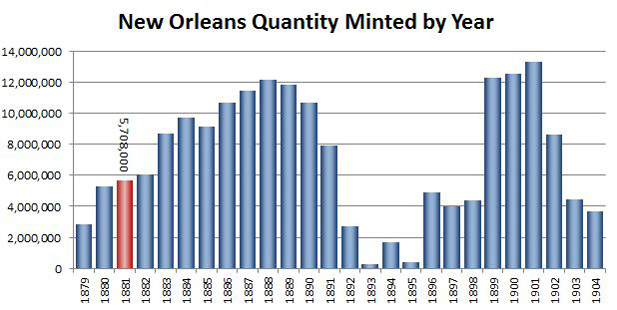 Unfortunately for Morgan Dollar collectors all estimates of survival rates have some degree of risk because a small or large hoard of coins can pop up at any time.  But after nearly 100 years one would believe any large hoards are all discovered.

So here is how we made our estimates, and they somewhat align themselves with other estimated survival rates.  These estimates are for New Orleans Morgans only, but the percentage of survival is somewhat parallel for all coins minted after 1878.

We started with the year of mint and worked our way forward year by year.  Since many available figures are stated only for all Morgans you have to calculate melting and interpolate them back to the 1881-O.

In years where there was no unusual silver price fluctuation we assumed that 0.1% of the available coins were melted by the privately for jewelry or other uses.

The government figures are available, but we have to remember that in New Orleans there was a disproportionate number of circulated coins because of the residual effect of the Civil War.  So we feel like our estimates are low if anything.

Starting in 1960 we increased the private melting figure to 1.0% of the remain coins as coinage was decoupled from the silver standard.

There are also moments in time where there is some unusual melting of coins because of the price of silver.  Any time that the price of silver is greater than the silver content in older coins we run the risk that larger quantities of coins make it into the melt pots.

One such moment in time was in the 1970s when Bunker and his brother William Hunt decided to corner the world-wide market on silver.  They started acquisition of their silver in the early 1970s and by 1979 the global market control was just about theirs.   It is speculated that they had control of 100 million ounces, surely enough to force upward pressure on prices.

All across the United States there were lines outside coin shops where people were turning in coins, silver services, and jewelry just to cash in on the phenomena as silver reached $50 per ounce.  However their success in silver price manipulation ultimately failed and they had to file for bankruptcy as a result of lawsuits.

During this feeding frenzy untold numbers of Morgan Dollars made their way to the melting pot.  We were there, and in our opinion, there was so much silver turned in that we believe there was little time for coin dealers to go through them and pick out rare ones.  For sure there would have been no time for VAM identification.

The Hunt brothers are gone, but the same phenomena still exists.  So long as the price of silver stays high, say over $10 per ounce, non-collectors are encouraged to continue to melt for cash. 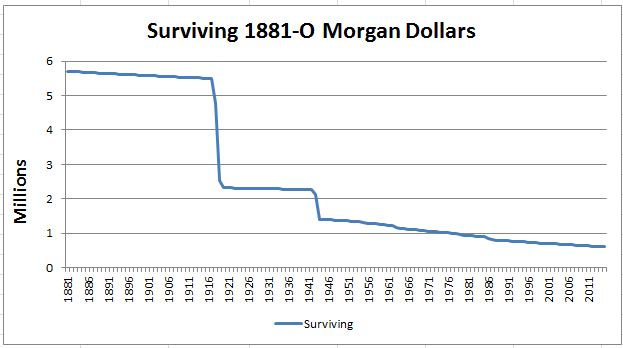 One of the great things about Morgan dollar collecting is just this process.  Since no one really knows what survives, educated guesses are fun.

One thing we know for sure is that every year there are fewer coins.  It is true that circulated coins disappear at a faster pace, but they all disappear at some pace.

And it is also true that coins already designated as rare disappear at a slower pace, but they all disappear.

There is a direct correlation between the predicted survival rate of New Orleans Morgans and PCGS price, but there are a few anomalies worthy of note.  These occur in 1886, 1893, and 1895.

While the Reconstruction Era is often described as the time frame from the end of the conflict in 1865 through 1877, there were other factors that may have influenced our 1881 Morgan Dollars.  First, newly emancipated slaves were largely illiterate and had an easier time relating to coinage rather than paper money.  And second, the white population had experienced the collapse of Confederate paper money.  So they too were inclined to hoard hard currency.

These factors are reflected in the Director of the Mint Report for fiscal fiscal year of 1881.

"The work of this mint has been principally confined to the manufacture of standard silver dollars, for which the demand through the South continued heavy during the year and nearly equaled the coinage. The monthly allotment of silver coinage was raised to 500,000, and occasionally to 600,000 standard dollars, and executed with dispatch and little additional expense under the efficient management of the officers of the mint."

There is little reason to believe these behaviors would have been different for the calendar year.  For this reason alone we believe the quantity of mint state New Orleans dollars may be overestimated until the memory of the Civil War monetary collapse had faded from memory in the South.  This same  anomaly would seem to have been true for coins from 1879 through some mythical date when confidence in paper money returned.

In theory the 1893 issue should be the most rare New Orleans Morgan coin.  But David Bowers notes one item that probably accounts for the 1895 rareness superseding it.  Mr. Bowers notes that in the release of the coins hoarded by the Mint in the 1960s there were no 1895 coins.  So it might logically follow that the 1893 Morgans were stuffed back in the corner of some vault, while the 1895 suffered the same fate as others and were destroyed due to the Pitman Act or other authorized meltings.

This rarity is reflected in the estimated mint state survival estimates of 5,960 and 718 respectively.

The 1886 New Orleans Morgan is also an anomaly. Using our formula there should be well in excess of 1 million coins for collectors, but it has not happened that way.  It is believed that large quantities went into circulation or were melted and that only 19,000 mint state coins remain.